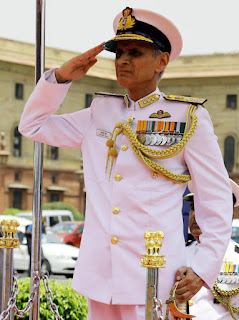 1. Vice Admiral Karambir Singh has been appointed as India’s Chief of Naval Staff. 2. He is going to replace the current Chief of Naval Staff, Admiral Sunil Lanba, who is going to vacate the office on 31st May 2019.3. Vice Admiral Karambir Singh was commissioned into the Navy in 1980 and has been honoured with the Ati Vishisht Seva Medal and Param Vishisht Seva Medal. 4.The officer earned his wings as a helicopter pilot in 1982. With this new appointment, Singh becomes the 1st helicopter pilot to helm the Navy.5. At present, he is serving as the Flag Officer Commanding in Chief of the Eastern Naval Command in Visakhapatnam.6. He is an alumnus of the National Defence (NDA) Academy, Khadakwasla. 7. He is a graduate of Defence Services Staff College, Wellington; College of Naval Warfare, Mumbai.8. In his 36-year-old career, the officer has commanded an Indian Coast Guard Ship, a Naval Missile Corvette as well as Guided Missile Destroyers. 9. He has also been a member of the Aircrew Instrument Rating and Categorisation Team (AIRCATS).10. His other important flag appointments include Chief of Staff of the Tri Services Unified Command at Andaman & Nicobar Islands and as the (FOMG) Flag Officer Maharashtra and Gujarat Naval Area .